The foundation system of the FMC Tower is primarily of concrete caissons, consisting of concrete columns constructed in cylindrical shafts excavated under the proposed structural column locations. The system of and the soil beneath the building prevent the complex from moving vertically, so the system is usually used when soil of adequate bearing strength is found below surface layers of weak materials such as fill or peat.  Caissons typically possess enough dead load to counteract moderate wind uplift. If additional “ballast” is needed, a contribution of the perimeter grade beams could be considered. The grade beams also engage the passive pressure-resistance of the soil and thus help resist horizontal column reactions. Caissons in the FMC Tower are 8 feet in diameter and are drilled about 50 feet below the surface to the rock. The advantages of caissons include: economic, minimizing pile cap needs, easily adaptable to varying site conditions, and high axial and lateral loading capacity.

Besides the caissons, one lower mat and one upper mat are used in the foundation system. The elevators are built on the lower mat. Mats are reinforced in two directions, both at the top and at the bottom. Heavyweight mats used in FMC Tower work well in resisting wind uplift, and their continuous reinforcement solves the problem of extinguishing the horizontal column reactions at the opposite ends of the frames. Mats possess high reliability but a low versatility, because they do not work with deep trenches, depressions, and pits. The strength of the concrete used in the foundation of the FMC Tower is high up to 10,000 psi with most of it as 6,000 psi. 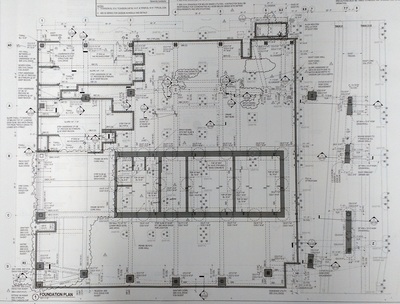 Core walls enclosing building services such as elevators, mechanical and electric rooms, and stairs have been used extensively to resist lateral loads in tall concrete buildings. The use of simple shapes such as C and I shaped walls around elevators interconnected with coupling beams constitutes one of the most typical methods of providing resistance to lateral loads.

In the composite version this system, a central concrete shear wall core is designed to resist the entire lateral load while the remainder of framing surrounding the core is designed for gravity loads using structural steel, metal deck and concrete topping as the figures shown below. The walls may be reinforced conventionally with longitudinal and transverse reinforcement, or may include embedded structural steel boundary columns in addition to conventional reinforcing bars. The successful performance of such hybrid structural systems depends on the adequacy of the primary individual components which are the core walls, steel frames, and frame-core connections. 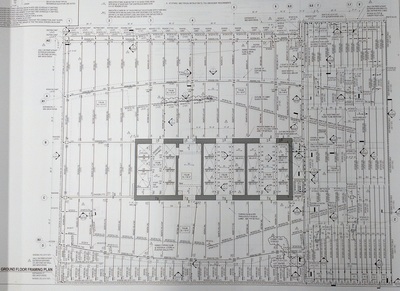 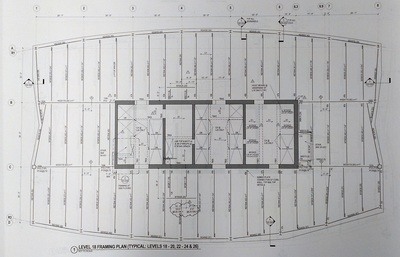 For low-to-moderate-rise buildings, up to 25 to 30 storeys, the concrete core can be used to provide a majority of the lateral force resistance. For taller buildings, the use of dual systems is more common, where the perimeter frames are engaged with the core. However, the FMC Tower is designed with two separate structures systems below and above the transition floor. The storeys 1-26 are offices, which are concrete core with steel frame structure, while storeys 29-46 are residential, where the structure is concrete frame. The steel frame will provide a taller ceiling to the offices, and the residential will only have concrete top without ceilings. Because the columns in the residential structure do not ally with those in the office structure, a transition from a forming system to a carry system and to a forming system is required.

A truss system is used in the transition floor, with the height of approximately 30 feet and a total of eighteen trusses of more than ten types of functions. Plates at the foundation for the residential tower transfer loads for all the concrete structure of the residential into the transfer trusses and into the concrete core of the office storeys. A number of transfer beams are also installed on the 28th floor, and the floors above are gradually simpler in structure. 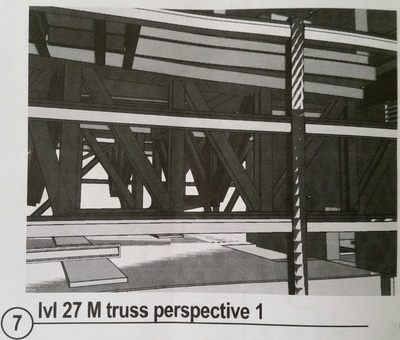 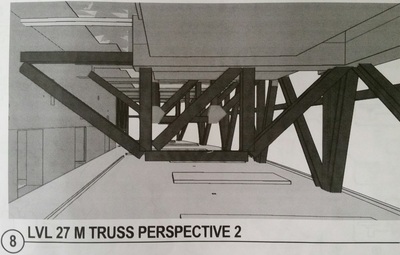 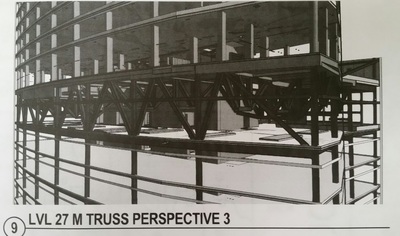 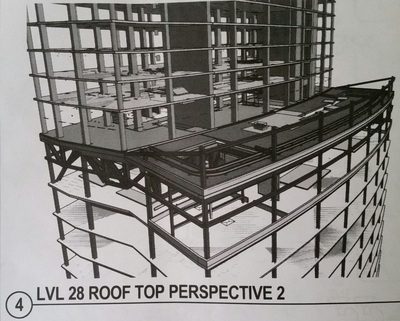 Concrete frame structure is one of the most common type of modern building. It consists of a frame or skeleton of concrete: beams, columns, and slabs. Beams are the horizontal members carrying lateral loads. Column is the most important member, as it carries primarily axial load and is generally subjected to axial load and moment. The beams and columns are connected by rigid joints. Slabs are horizontal plate elements carrying lateral loads. The frames provide resistance to both gravity and lateral loads through bending in beams and columns. Shear walls are also an important structural element, and in the residential tower, one shear wall of 1’6” thick is built. The function of a shear wall is to resist horizontal forces on buildings such as wind and seismic load, and it also carries vertical loads like the other columns do. A “concrete core” also exists in the concrete frame, but it serves as part of the columns and also as the elevator shaft.

Roof Framing Plan
The concrete used in the FMC Tower varies from 4,000 psi to 10,000 psi, and all concrete is required to include reinforcement. Reinforced concrete has a high compressive strength compared to other building materials, and it can withstand a large amount of tensile stress. The good fire and weather resistance and the sound proof characteristic of concrete makes it an appropriate choice for residential structure. Concrete is also one of the most economic materials. It can be easily manufactured on site when encountering the shortage in material by simply having a temporary facility in the field.

The number of the columns in the FMC residential tower is approximately 40. With more columns, the slabs can be constructed less complicated, which will make the whole structure more efficient. In common cases, the concrete frame rests on foundations, which transfer the forces from the building and on the building to the ground, but in the FMC Tower, the forces are transferred to the concrete core of the office tower as shown above.